Poll Position - Getting the Approval of Critics (Rising Star #2) 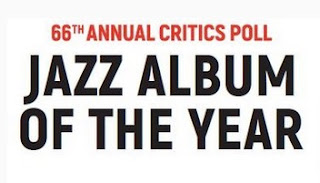 I very rarely express my true sentiments about ANYTHING on social media networks because I actually don’t think they’re the best forums for strong or controversial opinions that should be kept private. I normally limit my postings to announcements, publicity or to keep things light in general. But yesterday, a familiar and recurring grievance has reared its head once again that I refuse to ignore.

To be fair, it takes a minute, especially in the current arts climate, for young musicians to establish themselves and to be taken seriously as serious participants and/or contributors in the arts world. The exception, of course, are musicians that emerge on the “scene” who are fully prepared, artistically mature, or who have an exceptionally strong team supporting and promoting them. These days, there are very few situations that allow for steady growth and development as young hopefuls, full of dreams, hop around making one-nighters and doing whatever they can to “make it.” Once upon a time, it was very common that established veterans would regularly comb the clubs and local jam sessions in an effort to scout out new talent. I was fortunate enough to arrive in New York at the right time to witness and become a beneficiary of that apprentice and “trial by fire” system.

As times and circumstances change, the current wave of young players must rely on word of mouth, social media or a solid reputation in order to garner, at minimum, even a double take. The ranks are swollen with amazingly talented players, all vying for that ever-elusive pot of gold at the end of the rainbow. And yet, many persevere; make their mark and some make tremendous contributions.

However, closer to the actual point that I wish to make, is that just yesterday on various social media networks there are scores of musicians proudly posting their rankings from a popular music magazine’s “Rising Star” poll category. While acknowledgement and recognition of any kind is always welcome, I dare ask, just how valuable is the opinion of self-appointed “critics” really? Why is their approval so important to musicians? Is the validity of their credentials EVER brought into question? 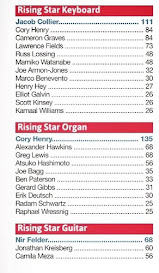 When I was a major label artist, the record company held good reviews and favorable poll positions in high regard. And yes, the artists that occupied the top positions in the lists seemed to get more attention and support. Concert and festival promoters also booked those artists more readily as well, whether those artists were considered provocative, truly creative, or “killing,” or not. All that mattered was that they got a thumbs up from critics in magazines that were basically glorified brochures for advertising. For the most part, they contained hacked-up interviews; blindfold tests and one or two paragraph record reviews. Not all, but most.

Not to rain on anyone’s parade, but in the real world, a poll position has absolutely no value at all. And to be honest, I find it particularly grating when I witness that gifted artists, who have put in solid work for 10+ years, have been deemed “Rising Star.” Years ago, the category was TDWR, or “Talent Deserving Wider Recognition,” which has less bite but generally means the same thing. Really, how long must an artist toil at his craft for a magazine to stop invalidating their efforts and labeling them as “up and coming?” I say that it cheapens their efforts and is basically a power play of those very publications, as well as their insignificant contributors - most of who don’t play shit and never have. Why do non-artists continue to rank and write about art?!!! And why do artists jump with glee when their name is included in a poll, often ranked beneath someone who “wins” every year - only because they’re a cherished veteran, flavor of the month or because their team bought a ton of expensive ad space. 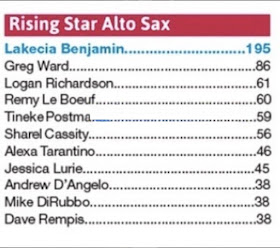 OK. Rant over. (Not that it’s going to change anything anyway) I have the same problem with these polls every year. I even wrote about it a couple of years ago on my blog. Check it out on the link below if you have time. Thanks for reading.